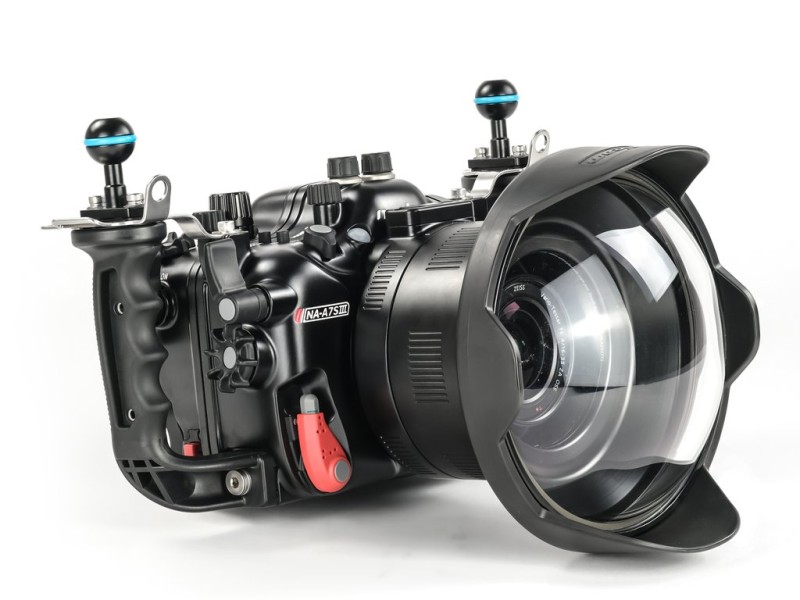 The NA-A7SIII is designed to maximize the video-centric capabilities of the Sony a7S III camera while maintaining it's strong still image potential. The NA-A7SIII is built around the N100 port system that is shared with the rest of the Nauticam housing lineup for the Sony full-frame mirrorless a7 series. The N100 system includes a dull range of both macro and wide-angle ports as well as delivering access to the lineup of Nauticam's professional wet optics that are optimized for underwater imaging such as the WACP-1/2 and the SMC-1/2 lenses. These optics deliver unparalleled image quality underwater expanding what is possible with the powerful a7S III camera.

The a7S III can output 16-bit raw video signal over HDMI and the NA-A7SIII features an M24 bulkhead that supports the HDMI 2.0 standard. This allows the NA-A7SIII to be used in conjunction with either a recording monitor such as the Atomos Ninja V in the NA-NinjaV housing via HDMI 2.0 or standalone monitors such as the SmallHD 502 Bright in the NA-502B housings via HDMI 1.4.

Nauticam engineer's Mission Control design philosophy means controls are intuitively placed where they are needed most regardless of their position on the camera. The NA-A7SIII features a double thumb lever within easy reach of the right handle that triggers the AF-ON and RECORD controls of the camera. A thumb lever on the left side toggles the PLAYBACK button. The back panel of the housing provides access to all other rear camera controls including a multidirectional pad.

The Nauticam vacuum check and leak detection system is shipped with NA-A7SIII as standard equipment. With the addition of the optional M14 Vacuum Valve (25624) this monitoring system provides constant updates on the water tight and safe-to-dive status of the housing. A simple color coded LED lighting system lets the user know that the vacuum is solid, or that the housing is losing vacuum. Leak detection is built into the same circuit, so if there is water intrusion, an audible and visual indication will occur. The Nauticam system is temperature compensated, eliminating false alarms caused by a change in outside temperature, or from a camera heating up on an action packed dive.