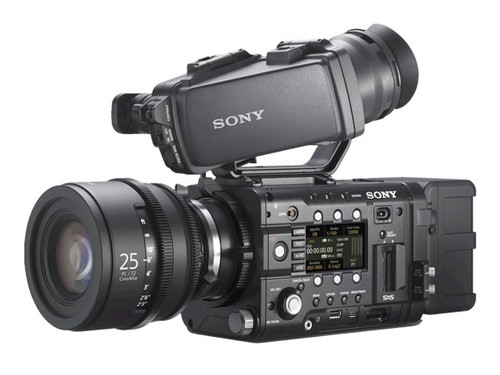 You can have simultaneous recording on internal high-speed SxS PRO+ memory cards and RAW 2K/4K recording on sleek AXSM™ memory cards using the optional bolt-on AXS-R5 recorder, designed specifically to attach seamlessly to the F55 and F5 cameras. There is also high speed shooting up to120 fps XAVC 2K/HD* internally and 120 fps RAW 2K onto the AXS-R5. *Expected as a future upgrade. ** Recording onto the optional AXS-R5 recorder. Lightweight modular design to maximize versatility in 2D and 3D The F5 is exceptionally small, light and modular, letting you build up the right configuration for each job - or each shot. As well as the choice of formats and internal and external recording options, you can attached a variety of viewfinders, including the revolutionary optional DVF-EL100 OLED viewfinder, PL-mount, FZ-mount and still lenses, including second-generation Sony PL-mount lenses, and extra long-life Olivine - Lithium Iron Phosphate - batteries. The chassis is only slightly wider than a typical PL-mount prime lens, perfect for 3D rigs. An optional shoulder rig provides for hand-held and shoulder-mounted shooting.

Highly Modular Design
In addition to the AXS-R5 recorder, a digital interface on the F5 allows for a variety of optional viewfinders. DVF-EL100 is a 0.7" OLED viewfinder with 1280 x 720 resolution. DVF-L350 is a 3.5" LCD viewfinder with 960 x 540 resolution, and the eyepiece flips up for direct monitoring. DVF-L700 is a 7" LCD viewfinder with 1920 x 1080 resolution for monitoring Full HD pixel-for-pixel. Other modular components include the optional Sony shoulder rig, which features industry-standard rosettes on both sides for quick and easy attachment of third-party hand grips and other accessories.

Native FZ-Mount and PL-Mount Adapter
The F5 is designed to accommodate a wide range of lenses. With the PL-mount adaptor, you can take advantage of acclaimed cine optics from Angénieux, Canon, Carl Zeiss, Cooke, FUJIFILM, Leica and more. Slip off the supplied PL-mount adaptor to reveal the native FZ-mount with an 18mm flange focal distance. The FZ-mount provides an interface for native FZ lenses like Sony's SCL-Z18X140 auto focus servo zoom lens or a range of adaptors for still lenses, including Canon EF, Canon FD, Nikon F, Leica M and more.

Dynamic Range Rated at 14 Stops
The ability to render a range of exposure values from deepest shadows to brightest highlights is a crucial test of any digital camera. The F5 is capable of an impressive 14 stops of exposure latitude, low-light sensitivity and low noise in the blacks. The digital sensor's dynamic range approaches that of traditional motion picture film.

Intuitive One-touch Interface
Designed with significant input from cinematographers, the F5 features an intuitive interface for a range of controls. Instead of diving through menus, you get direct, one-touch access to key shooting parameters including frame rate, shutter speed, color temperature, ISO sensitivity and gamma. Assignable buttons mean that your favorite adjustments are always at your fingertips.