back to Camera Support > Stabilizers and Gimbals 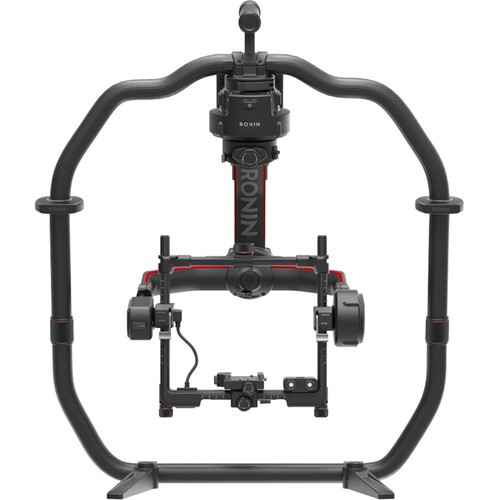 The versatile Ronin 2 gimbal from DJI is suitable for use either handheld or mounted in a variety of ways including onto a drone, Steadicam, vehicle mount, and more. An update from the original Ronin, this motorized stabilization system is suitable for a range of camera and lens configurations, boasting a payload capacity of 30 pounds. This means it can be used for everything from DSLRs up to cinema cameras such as the ARRI ALEXA Mini or Sony FS7.

Like its predecessor, the Ronin 2 features support for underslung, upright, and briefcase operation modes to help you achieve the best angle. However, it has been redesigned to enable easy transition between upright and underslung modes without changing the position of the camera. It also offers several other improvements, such as enhancements to the control software and physical design to simplify taking complex shots without sacrificing performance, all while making important functions more readily accessible.

With up to eight times more powerful motors than previous iterations, Ronin 2 can withstand sustained speeds of over 75 mph with camera builds as heavy as 30 pounds. Thanks to encoded motors and enhanced precision, the Ronin maintains the same 0.02 of accuracy of its predecessors.

A detachable grip allows the Ronin 2 to stand up on its own, and is easily separated when the lower part of the handgrip is not needed. In addition to handheld work, the Ronin 2 supports mounting on cable cams, drones, Steadicams, vehicle mounts, and more.

A dedicated high-brightness touchscreen for settings and adjustments has been integrated into Ronin 2, streamlining and accelerating gimbal setup. Tactile buttons including motor pause are placed easily within reach.

Two batteries on Ronin 2, and the ability to run with only one, allows for batteries to be charged and swapped without interrupting a shoot.